What Can We Learn From A Rainbow?

What is a rainbow? 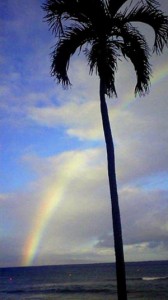 Rainbows can be observed whenever there are water drops in the air and sunlight shining from behind at a low altitude angle. Rainbows can also be seen near waterfalls or fountains. A rainbow is caused by light refracting through water droplets (rain/water) in the atmosphere, resulting in a spectrum of light.  The rainbow appears when you are between the droplets and the sun is behind you. The light from the sun is refracted as it enters the surface of the raindrop, refracts off the back of the drop and again refracts as it leaves the drop, resulting in a multicolored arc.

What Makes the Colors?

What Causes a Double Rainbow?

When there is a double reflection of sunlight inside the raindrop, a secondary rainbow may be seen, but the colors will be inverted compared to the first, with blue on the outside and red on the inside.

What About Rainbows in Literature? I found several beautiful references to rainbows:

And the bow shall be in the clouds…And God said to Noah, This is the token of the covenant, which I have established between me and all flesh that is upon the earth. Genesis 9:17 (KJV)

Through gloom and shadow look we

On beyond the years!

The soul would have no rainbows

We, of many cultures, languages and races are become one nation. We are the Rainbow People of God.Desmond Tutu, in speech before the National Assembly of South Africa, - 1994

God put the rainbow in the clouds, not just in the sky… It is wise to realize we already have rainbows in our clouds, or we wouldn't be here. …in the worst of time, there is the possibility of seeing hope. We can say "I can be a rainbow in the cloud for someone yet to be." That may be our calling. Maya Angelou – Harrisburg Forum – 2001

Author’s Corner:  Do we write to create a rainbow for our readers? Do your characters, themes and plots engage and edify the reader? When someone buys your book, they’ve placed their confidence in your ability to entertain or enlighten them in some way. You have an opportunity. Make your words count for something worthwhile.

Everyone Else: You have a choice. When you encounter others who project anger, sadness, or a mean spirit, don’t withhold the light and reflect only the blue aura of yourself. Let the sun shine through your spirit. Reflect the widest angle of red in your rainbow and be a friend to those you meet!