How Characters can Highjack A Story

I’m never surprised what my characters highjack the story. I follow their lead until the scene plays out. When this happens, sometimes it takes the story in surprising directions. It is most unnerving and sometimes I have to ask, “How do I get him out of this predicament?” Of course, that’s often when the mischievous character decides to take a vacation and leaves me trying to resolve how to get the character out of the muddle they just created.

My parents used to tell me that as a toddler, I buried my toys in the sand and my dad had to dig around and try to find them. Aha! The proverbial lightbulb flashed over my head! What if years ago, a toddler buried something that wasn’t found until now it it becomes the clue to solving a murder today?

With that concept in mind, I started writing my first novel. I thought it would be a story about a divorcee who wants to solve her father’s cold-case murder, and something she buried as a baby would reappear and be relevant to solving the murder. Quite without intending it to happen, a tuxedo cat (Thumper) jumped into the tale, took over, and became the main character as he used his ancestor’s memories to help her solve the case. Black Cat’s Legacy was born. This led to Black Cat and the Lethal Lawyer, Black Cat and the Accidental Angel, and Black Cat and the Secret in Dewey’s Diary. (Available at Amazon in paperback and e-book) 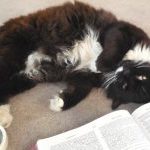 Some people ask, “What do you do when you have writer’s block?” When this happens to me, I ask myself, “What’s the worst thing that can happen?” I conjure up several alternatives, pick one and run with it.

Here’s an example: Let’s imagine I want to write a mystery. The main character is a private detective who I eventually plan to get involved in a murder case. The story starts with my main character innocently frying bacon one Saturday morning. What happens next? What’s the worst thing that can happen? The skillet catches fire.

She grabs her cell phone to call the fire department. What happens next? What’s the worst thing that can happen? Dead battery!

She runs, screaming, to the front door. “Help! Fire, fire! Help!” She flings open the door.

A handsome neighbor appears and puts out the fire; 275 pages later they have fallen in love, the killer never appears, and eventually our characters ride off into the sunset… A love story…Well, you get the picture.

The characters in this illustration just ran away from me. I had planned this scene to be about a mystery, with a kitchen fire, and intended to have the killer sneak up behind the lady at the stove, but the characters had another idea and a handsome neighbor appears, instead. My 30-second characters took control and turned my illustration upside down into a love story.

When I write, I’m never totally in control. I’m sort of along for the ride. 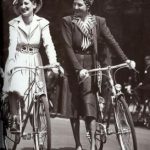 This is a repeat post, but always a good one when Valentine's Day is near.

We quarreled this morning. I threw his favorite blue cup across the room. It shattered when it hit the hearth. I screamed “I hate you!” and ran out the door. I kicked the tires on my car.

I was angry all morning. Every time the phone rang, I was sure he was calling to apologize. Why didn’t he call? I wouldn’t call him. He was wrong, right?

The afternoon dragged by. It’s 5:00 P.M., and I’m leaving the office. … The traffic is terrible and I’m anxious to get home. It’s not that I’m going to apologize. It was his fault that we quarreled, but it’s too tiring to stay mad. I want everything to be okay between us again.

The cars creep along the freeway and I check my watch.

He should be home by now, waiting for me, listening to music, probably drinking a glass of red wine. I’m sure he bought me flowers for Valentine's Day. I can’t wait to see what kind he chose.

It started to rain and the leaves swirl across the highway, gathering on the edge of my front window. The windshield wipers swish. They seem to say, “hate-shoo, hate-shoo, hate-shoo.”  I remember how I said those words and tears sting my eyes. I didn’t mean it. I reach for the cell phone in my purse and touch instead, a melted chocolate candy kiss. I lick the chocolate off my fingers and smile, remembering the night, not so long ago and his words, “This kiss signifies my love.”

Now I'm ready to tell him 'I’m sorry', even if he was wrong. I want his arms around me. I want his lips to caress my throat. I want us to be together.

I don’t see his car.  It must be in the garage. I know he heard me pull in the driveway, and even now, I can almost see him rushing to the door with a glass of wine and the flowers. In a minute, he will kiss me and whisper, “I’m sorry…”

I turn the handle on the front door. Why is it locked? I turn my key in the door and call his name. The room is empty. There are no Valentine flowers. Where can he be?

A gust of wind rushes in, slamming the door behind me. My eyes are drawn to a chocolate candy kiss as it rolls off the table. A single sheet of paper flutters for a moment, then settles to the floor...

Hope your Valentine's Day has a better ending. Don't let the day begin or end without saying, "I love you."   Elaine Faber