A Day in Salzburg with Kimberlee 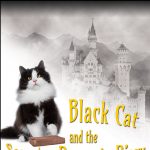 This is a scene from the dual tale, Black Cat and the Secret in Dewey's Diary. While the cats face their own challenges in Fern Lake, Kimberlee has gone to Austria and Germany where she follows clues to a lost treasure in gold coins, stolen during WWII. One day, while site-seeing alone, she visits Salzburg. The following is her experiences in the city. https://tinyurl.com/vgyp89s (Amazon e-book $3.99)

As Kimberlee passed through the countryside and the forests, the terrain varied and the road rose and fell. Around every corner, another picture post card vista appeared. With no particular agenda, she stopped frequently to take a photograph.

In some green meadows, the only sound was the tinkling of shiny brass bells, hanging from the collars of a flock of sheep or a small group of black and white cows. In other places, the gentle terrain rose up into a fine mist clinging to the side of hillside. Hidden in the distant mist, tinkling bells confirmed grazing animals, unaware of how their bells produced such stirring in the heart of a captivated tourist.

The vineyards on the hills and meadows became fewer as Kimberlee approached Salzburg where Mozart first played his harpsicord and wrote melodies. Hundreds of years later, people would still know his name and enjoy his music.

Ancient ivy covered buildings with sagging tile roofs covered the courtyards along the sidewalk. Church spires peaked out above nearby houses with red tile rooftops. She paused beside a church with dates carved into the walls reading 1200-1400. How incredible! One church was said to be 1000 years old!

Violin music drew her toward the town square where a street musician stood on the steps of an ancient church, playing Ave Maria. Pigeons flew from rooftop to rooftop, appearing to be as mesmerized by the music as the cluster of tourists gathered on the steps.

The haunting melody echoed around the square. It touched her heart as it carried her away from this world and back into another time. It was easy to imagine the cobbled streets filled with horse-drawn carts. Perhaps a princess and her ladies in waiting passed by, or a knight in shining armor, after a joust with a dragon.

The musician drew his bow across the strings and as he lowered his hand, the final note hung in the air. The tourists stood spellbound and silent. Another moment, and the spell was broken and more generous visitors tossed money into the violin case at his feet.

Kimberlee opened her purse. “That was absolutely lovely! Thank you.” She put money into his case and wandered on.

She ran to catch a tram climbing to the top of the hill where a medieval castle overlooked the city, a cold and barren place with steps everywhere. The rooms were filled with armor, ancient guns, javelins, chains and torture devices. Looking down from the balconies into the valley was like peeking into the pages of a storybook. Rainy mists on the distant mountains beckoned hikers upward into the cold crisp air. Off to the left, rivers, towers, cathedrals, graveyards, and church spires. Off to the right, cobble-stone streets with horse-drawn carriages, sidewalk cafes, musicians, and archways, where street vendors hawked their wares on the street corners.

Returning to the city below, Kimberlee came upon a street artist, his back against the wall, his easel and backpack by his side. The watercolor drying on his easel was of the scene where the musician had just played his stirring aria on the church steps. Unable to resist the desire to memorialize the moment, she purchased the picture. She would have it framed and hang it near her bedroom, where it would be a constant reminder of the musician, his poignant melody and the day spent in the magical city.