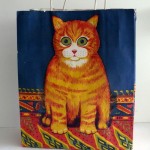 Jenny’s shrieks followed Tom as he skipped down the sidewalk to his 57’souped-up T-bird parked at the curb. Like many times before, when his girlfriend’s grew tiresome, he’d walk away. Women were like shoes. When the shine wore off, you got a new pair. Women always expected commitment and Tom wasn’t the committing type.

Jenny clutched her black cat to her breast, “I should never have allowed myself to care so much.” A brown Maltese, a golden-eyed, pure white cat, and a tan blue-eyed beauty with Asian ancestry, hunkered nearby, commiserating with her sorrow.

Reflections from the high window bounced off Jenny’s wine glass and cast a rainbow across the far wall. She took a sip and lifted her head. “Lord knows, an orange one won’t make me feel any better, however…” A faint smile twitched her lips. “On the other hand, perhaps an orange one is just what I need.”

The black longhaired cat in her lap gazed into her eyes and yawned. “Come on, guys, let’s get a snack. Then, I’ll go shopping.” Her feline menagerie followed her to the kitchen.

Jenny gazed at the four cats hunkered around a pile of Friskies like four spokes of a wheel; black, brown, white and tan. Didn’t Tom have a lunch meeting today at a little restaurant on Main Street? Jenny whispered. “Let the games begin.”

Jenny lifted a dusty box from a garage top shelf and removed a black hat sporting a long black feather. She ran her fingers over its velvety texture, from nib to tip. “This will do nicely.” Dust rose from the feather and disappeared in a wisp of breeze.

In her closet, she found a black pantsuit. The height of 1980’s fashion with shoulder pads in the jacket and bellbottom pants. She shook the wrinkles from the jacket and frowned at the tiny moth hole in the left sleeve. Had it been that long since she got the last one? She could have sworn it was just a couple years before. It was definitely time for a new one.

Jenny donned the pantsuit and the black feathered hat and topped off her ensemble with a bangle bracelet and a lion head medallion necklace. She nodded, satisfied with the image reflected in her hall mirror.

She stood outside the magic shop, staring at the items in the window. In a few minutes, Tom strode down the street, his head held high, his bright red hair blowing in the wind. He spotted Jenny just as she dashed into the magic shop. Once inside the door, eerie shrieks and squeals of organ music, enough to chill one’s soul, blared through an elaborate sound system.

Startled to see her there, Tom followed her into the store. “Jenny, is that you?”

Jenny hurried through the darkened aisles toward a dimly lit corner piled high with boxes, capes, and baskets heaped with assorted Halloween decorations and magician’s paraphernalia.

Tom followed her into the furthest dark corner, where the black light overhead reflected a neon aura off the logo on Magic Marvin’s Magic Shop black shopping bags.

Tom’s gaze followed the drifting feather on Jenny’s hat, caressed by the air conditioned breeze. “Jenny? Are you headed to a costume party?” His gaze stayed locked on the swaying feather.

“No,” Jenny whispered, “I was waiting for you.”

“Oh, yes. I think we do.” She tapped her long red fingernail three times on the stack of black Marvelous Marvin’s Magic Shop bags and whispered, “Dinkle, Dinkle, Catzenwinkle.”

Jenny laid the bag on the counter. “I’ll take this one.” She paid and left the store.

Back home, Jenny poured another glass of wine, and filled a plate with crackers and cheese, and set the shopping on the floor. “Come my lovelies,” she cooed.

Out spilled a carrot-orange striped cat. He gazed wildly around the room, his big round eyes filled with horror… The four cats nibbled their cheese and glared at the newcomer with amusement.

“Tom has come to live with us. Welcome your new changeling companion.” Jenny tossed Tom a bite of cheese, folded the shopping bag and shoved it into the trash .