Camping With Kids - A true story 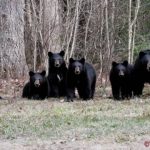 ‘Camping with your children brings families together.’ The full magazine article went on to describe the family sitting around a roaring fire, making S’mores, roasting marshmallows, and making memories to last a lifetime. That’s what my family needed. More bonding and less bickering. I tossed the magazine and phoned my husband. “We’re going camping with the kids.”

By the time he got home, I had I borrowed a tent, a kerosene lantern, sleeping bags, a campstool, camp cots, cooking gear, kerosene cook stove, and an ice chest from friends and made arrangements for the neighbor to feed the cat. Hubby capitulated with arm-twisting and the promise of a fishing trip later that summer. It took the promise of a Barbie doll and roller blades to gain the children’s cooperation.

The smooth-talking Outdoorsman salesman persuaded sold me dehydrated ham and eggs, powdered potatoes, canned beef stew, dried prunes, beef jerky and powdered applesauce. He guaranteed I had enough to cook, stew, puree, and heat over a cheery campfire and create gourmet meals for a family of four for two days. The picture on the dehydrated ham and eggs showed a mom on a hillside with the breeze blowing through her hair. The canned beef stew can showed Daddy snoozing in a camp chair with his dog at his feet. The brochure promised memories to last a lifetime. It had to be true; it said so, right there on the front label.

We set off for a campground in the redwoods, about an hour away. The drive was punctuated by my son’s fingers in his mouth, eyes crossed, and tongue protruding while his sister screamed, “Make him stop looking at me!” Precious kids!

With no guardrails on the steep, winding road to our campground, rocks rolled over the canyon edge as the car wound around hairpin curves.

We found our assigned campsite one-half block from the outhouse and 200 feet from a pipe with a faucet on top, surrounded by 263 bees. Thus, an explanation of the phrase–dry camp. No running water, no electricity and the aforementioned outhouse.

After pitching our tent, hubby started to assemble the camp cots, only to find the poles on the end of each cot were missing. Our sleeping bags would now lie on the hard ground. My thoughts strayed to my own bed with fourteen inches of cotton batting, memory foam and bedsprings. Ah, well, I reasoned, the promised family togetherness would be worth it.

The children chased around the camp, and then my 7-year-old daughter requested I accompany her to the facilities. We walked past other campsites and noticed folding chairs, down comforters, portable record players, and Porta Potties. What did they know that I didn’t know? The answer soon became clear. Within fifteen feet of the outhouse, all that we had previously thought we knew about outhouses didn’t hold a candle to the reality. An indescribable smell hung overhead like a cloud. The outhouse door hinges defied latching. Holding our noses, we rushed the door. The sight inside took away all bodily urges and we raced back to our campsite. The bushes held more promise.

We learned that up the road was a washhouse with real toilets. We made a plan to do a bathroom run after dinner. Also, no open fires were allowed in the fire pits. No problem. We had the little kerosene stove to cook our instant and dried foods... Hubby unpacked the stove. Flip this, fold that, click in the burners, attach the kerosene tank, pump it up and light with a match. Easy-peasy! He pumped and pumped vigorously–it would not light. The sssssssssheoshee emanating from the kerosene tank could only mean…a minute hole in the tank. Thus, no hot water for a dried, vacuumed-sealed, gourmet meal.

“Don’t worry,” I assured my disappointed family. “We can eat the canned beef stew cold.” I reached for the can opener. “It must be here somewhere.” No can opener. “Um…I must have left it on the kitchen counter.”

Like all survival conscious men, Hubby always carried a pocket knife. He attacked the can with a vengeance. The children sat with tin plates in their laps, like the hungry waifs from a Charles Dickens novel, waiting for their daily gruel.

My daughter’s shriek interrupted my fascination with the jagged hole Hubby was gouging into the beef stew can. She danced around the cold campfire, beating her chest and tore at her tee shirt, which I pulled over her head. A flattened kamikaze bee dropped to the ground, twitched and lay still. Several inflamed bumps swelled on her chest. Of course, the first aid kit was likely lying beside the can opener on the kitchen counter. We painted her upper torso with a mud poultice.

By now the ragged hole in the top of the stew can revealed its contents. Unfortunately, it was all too reminiscent of the contents in the outhouse. The anticipated hopes of the family gathered around the fire, eating a gourmet meal tumbled into the dirt next to the stew. The children tossed their tin plates beside the mutilated can and ripped open a bag of dried prunes.

“Ah well,” I mused, as I bit into a dried prune, “family togetherness….”

Shortly thereafter, the sun disappeared behind the towering pine trees and darkness crashed around us. It was 5:45 P.M. “We can sit around the fire pit by lantern light and pretend we have a roaring fire. We’ll tell stories,” I cheerfully suggested. (You can see this coming, can’t you?) A few pumps on the kerosene lantern should have blossomed into a soft and romantic glow…but didn’t. “Please don’t tell me the tank is empty,” I squeaked, barely able to distinguish the features of my amazingly quiet children who were holding hands in the darkness.

My long-suffering husband pumped furiously on the lantern, to no avail. That family memory joined the beef stew, oozing into the mountain dirt, casting an ominous green glow.

I munched on another dried prune as we visited the washhouse where we thankfully used the facilities. Returning from the washroom, Hubby turned off the headlights and we sat in total disillusionment and despair for about five minutes, staring at the sagging tent, dark fire pit and useless accouterments. Should we give up and go home or stay? Going home meant driving down death hill, at risk of plunging over the canyon, or going to bed at 6:30 PM in the hot tent.

My husband wanted to chance the hill and sleep in his own bed. I insisted it was only twelve hours till dawn when we could strike the camp and get out of this hellish nightmare.

From the barely discernible expression on Hubby’s face, I knew he would never forgive me.

Our four sleeping bags touched on the canvas tent floor. An enormous lump pressed into the small of my back. Why hadn’t we cleared the rocks off the ground before we set up the tent? We could only wiggle and squirm and try to sleep. Blackness...hot air...kids snoring… Was that a bear? No clock... I heard a mosquito. Mosquitoes find me the way bears find honey. I had to get inside the sleeping bag or be eaten alive…. Oh Lord, what time is it? I poked my husband. “Honey, what time is it?”

I would not survive the night. I would go insane before dawn. The strains of Kum-By-Yah drifted faintly from another campsite. I hated those well-prepared campers.

Within a few hours, the unbearable heat turned into a freezing mountain chill. 895 hours later when I could faintly see Hubby’s scowling face, I punched him. “Are you sleeping?”

We struck the tent, wadded and pitched it into the station wagon. We tossed our still unconscious children on top of the tent. The sun cast a faint glow across our neighbors, dreaming of last night’s gourmet meal cooked over a functional camp stove and story time, having bonded with their kids beneath the lantern light. We roared out of the campground and hurtled down the hill, spewing rocks over the canyon wall. We did not look back.

By 7:45 A.M. we were at our kitchen table eating bacon and eggs. We laughed about the camping disasters until the tears rolled down our faces. It became a memory that will last a lifetime.