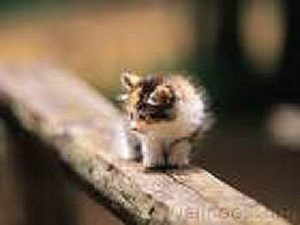 Once, in a faraway land, on a crisp winter afternoon, Kitty strode across a hillside, a contented pussy cat, her tummy full and her breath pungent with the after-flavor of this morning’s breakfast mouse. She settled on a warm rock for a snooze in the sunshine near a group of shepherds tending their sheep. As the flock moved down the hillside, the bleating of lambs faded into silence. With her tail curled around her nose, Kitty fell asleep.

The twittering of a bird interrupted her catnap. Kitty’s eye peeked open. The tip of her tail drifted from side to side. What’s this?

She slipped off the rock and inched toward the unsuspecting after-breakfast snack. Kitty’s whiskers snapped to attention. Every hair on her head stood upright. She was a silent warrior armed with experience, girded with strength, clad with skill. The bird was within striking range; distance calculated (ten feet, six and a half inches); wind velocity (twenty-one and a half mph from the south-southeast); thrust computed; muscles poised. She leaped.

The striped instrument of death hurtled toward the beautiful white bird. At the last moment, she fluttered off the bush. Kitty seized her wing and pulled her to the ground.

The white bird shrieked. “Wait! Don’t eat me I’ll make it worth your while if you spare my life.”

Much impressed by the bird’s bravery, as misguided as it was under the circumstances, Kitty paused, curiosity being a trait of her breed, often quoted as being the method of her kind’s demise. “What can possibly change my mind, my pretty?” She tilted her left ear as she licked her lips and tightened her grip on the bird’s wing.

The white bird lifted her elegant head, and folded her one free wing against her quivering body. “If you set me free, I promise, ere the night is over, you will receive a great blessing that will bring honor to you and all your descendants.”

Kitty loosened her grip and pondered the bird’s message. If true, a blessing would be a fine legacy to leave her descendents. Much more likely, the blessing was a ploy to escape. But, what did she have to lose? Intrigued, and frankly, still burping this morning’s mouse, she agreed. “I’ll let you go this time, but if you’re fooling me, next time we meet, I’ll show no mercy.” She lifted her paw.

The grateful captive fluttered from her grasp. She circled, dipping low over Kitty’s head. “Remember! Ere the night is over! I promise,” she cried and disappeared behind a puffy white cloud.

“A blessing! Indeed!” Kitty shook her body from nose to tail, dispelling the idea that she had been foolish to believe such a story.

As the stars blinked across the night sky, Kitty returned to town. She came upon a cave where cows and a donkey nodded, warming the area with their breath. In the corner, a lamb curled next to its mother.

Kitty jumped into the box of straw near the cow, turned around three times and then curled herself into a ball. Gentle snuffles from the lamb combined with the cows’ warm breath created the perfect ambiance for a long winter nap. Kitty was soon fast asleep and dreaming. Dots of white sheep ambled down the dark hillside. Overhead, the white bird darted across a yellow moon as shepherds moved their flock toward town.

Gentle hands lifted Kitty from the straw. She opened her eyes and saw a young bearded man who set her gently on the ground. “Here, Kitty, will you give up your warm bed? It’s just the right size for the baby.” He laid the swaddled infant in the straw where Kitty’s body had molded and warmed a circle of straw.

Kitty lay down beneath the manger, curled her toes into a semi-circle, fascinated by the sudden activity in the stable.

The father heaped up a soft bed of straw for the mother. He hovered nearby, brought her water and covered her with his cloak.

Shepherds from the hillside entered the stable and knelt at the feet of the Babe.

Two white birds fluttered through the open door, circled and came to rest on the edge of the manger. Wasn’t that the same bird she had freed that afternoon? Wonder of wonders, a brilliant light shone above the manger. Where the birds had rested, angels now hovered on each side of the Baby.

In the later hours, three men dressed in fine colored garments came to worship the Baby and presented him gifts of gold, frankincense and myrrh.

When the worshipers had gone, in the stillness of the stable, the family slept, while the angels kept watch.

Kitty approached the angels and addressed the angel from earlier in the day. “Angel, I know this is the Promised One the world has waited for. I feel unworthy. The others brought gifts. I have no gift to give.”

“Kitty, Christ Child wants only the gift of our reverence and obedience. Tonight, you willingly gave up your warm bed for the Christ Child. In return you receive a great blessing you and your descendants can treasure for generations to come.”

Kitty curled her tail around her nose and began to dream of cat-things, naps in the sunshine, chasing mice, catching birdsperhaps she would forgo that pleasure in the future. One never knew when the bird might be an angelor when a good deed might turn into a blessing, but none as great as the blessing she had received this night. The chance to warm the bed of the Christ Child.