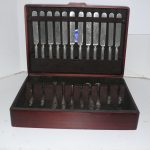 Corrine sighed as the comforting scent of turkey wafted through the dining room. She glanced at the clock, mentally judging her dinner’s progress with the anticipated arrival of the children. Her mother’s china, crystal wine goblets and silverware were lovingly arranged on the dining room table. She continued polishing a silver fork from her mother’s rosewood silverware box and placed it next to a wine goblet.

She remembered the holidays at Mom’s house when all the grandchildren came to dinner. The lights from her chandelier had shimmered and bounced off each shining goblet and piece of silverware. Mom would move a spoon a fraction of an inch until it was just right and then, placed a chocolate kiss on each plate.

“There,” she would say, “that’s so they know they are loved.”

Corrine’s husband mumbled something unintelligible from the family room. “What are you doing in there?” Corrine called.

“I’m converting your Dad’s old 8- mm movie films to VHS. We can show the grandkids pictures from your childhood.”

Corrine returned to the kitchen and poured herself a glass of wine. She pulled her mother’s casserole dish from the cupboard. Her thoughts turned again to memories of past holidays.

She recalled the Christmas’s and Thanksgivings when mom and “the girls” all bought party dresses specifically for the event. The tradition ended when her mother passed away.

Through the years, Corrine moved up a generation in the family chain. She had become the gray haired “Grandma,” and her daughter took her place. Different little children bustled through the house.

“Where have the years gone?” she thought.

Corrine returned to the dining room and placed the polished fork on the table. Mom’s silverware was a tradition that had been present for 60 years, throughout years of young motherhood and still remained a part of every holiday dinner. It was a constant, defying the loss of loved ones, gray hair, or climbing through the links of the family chain. The silverware would grace her daughter’s table some day; a reminder of her childhood holiday memories. It would become part of her tradition as she created new memories with her children.

Corrine admired her table setting. It looked nice. “Oh! I almost forget the kiss!” she said, adding Mom’s droplets of chocolate love on each plate. Mom would be pleased. Corrine wondered, Where did Mom get the silverware? It was not likely to have been a wedding present. Mom and Dad were married during the Great Depression.

Her husband interrupted her memories. “Honey, come take a look at this. It’s one of your Dad’s old Christmas movies when you were a baby.”

They sat together on the couch, sipping wine, watching the jumpy speckley black and white film flicker across the bed sheet pinned to the wall.

The speckles became Corrine’s mother and dad. It was Christmas Day, 1946. Cousins Dolly and Beverly hugged giant dolls and little Allan sat on the floor in front of the Christmas tree. Corrine saw herself, a three-year-old, holding an enormous doll. Her unbelievably young mother smiled from the bed sheet. Corrine’s nine-year-old brother,, Vernon, chased little cousin Allan around the room with his new BB gun, making faces at the camera. Big sister Lois and Cousin Wilbur ripped open puzzles and books. Only one last gift remained.

Dad handed a large package to Mom. She smiled, looking uncomfortable in the spotlight. The Christmas wrap fell away. She opened the beautiful rosewood box filled with shiny new silverware. Her face beamed and she mouthed a silent “thank you.”

How Dad must have sacrificed to buy such an expensive gift in 1946 when jobs were scarce and times were hard.

Here was the birth of Corrine’s most precious family tradition; the beautiful rosewood box filled with silverware. A connection she still shared with her mother, one that she would continue to share with her daughter and her granddaughter for years to come.

The oven buzzer sounded. The turkey was done. Corrine wiped the tears from her eyes, picked up her wine goblet and hurried to the kitchen. Time was getting away and the children would soon be here!

Reader: If you enjoyed this story, please check out my seven novels on Amazon in paperback and e-book.