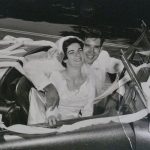 With our 58th wedding anniversary next week, I thought it was time to share our honeymoon story again. Hope your honeymoon wasn't quite as eventful, but still filled with love and good memories.

While sorting through my cedar hope chest recently, I uncovered my wedding gown and honeymoon nightie. A few shreds of rice still clung to the polyester material. I thought back on the days of our unusual honeymoon as I folded and smoothed the purple nightie.

June 17, 1962 was a perfect day. The sun beamed through the stained glass windows. The scent of flowers and music filled the auditorium.

“With this ring, I thee wed,” and we were man and wife, twenty years, and eighteen-years-old respectively.

Following the reception, consisting of wedding cake and fruit punch, we raced through torrents of rice, eager to reach our secret honeymoon motel in a nearby lake resort town. That night, we planned to celebrate by having dinner at a real restaurant.

While dating, we had eaten at hotdog stands, drive-in movie snack shacks and BBQ’s with family, but we had never gone to a real restaurant. A candlelight dinner at a restaurant was a rite of passage, signifying that we were now married adults. It would be a cherished memory, a perfect beginning to our wedding night.

The sun shone hot on our heads as we drove with the top down on our 1958 MGA.   The excitement of the day took a toll on my young husband. His head began to throb and maybe “nerves” played a role as well. In our day, “the wedding night” created some anxieties than many young grooms don’t experience today.  Several hours later, we reached our honeymoon cottage on the shores of a sparkling lake. My young husband threw himself on the bed, head pounding, eyes aching, a wet cloth held to his forehead, and begged to be allowed to die in peace. He wasn’t up to dinner at a fancy restaurant.

A brand new blushing bride, I pushed a grocery cart through a tiny grocery store in the resort town on my wedding eve, and selected spaghetti, hamburger, tomato sauce, lettuce, and salad dressing. I soon found myself in front of a tiny stove in our honeymoon cottage, cooking spaghetti on my wedding night while my husband groaned on the bed.

Monday dawned bright and clear, a hot and perfect June day and we slept late, lulled by the lapping waves on the nearby shore, headaches and anxieties of the day before a forgotten memory. We spent the afternoon in the park in the shade of a willow tree, watching the squirrels. We kissed and spoke of where we would have our special dinner that night, a celebration of our one-day anniversary. We swam and frolicked in the lake. My new lord and master climbed a nearby diving board.

“Hey, Hon, look at me,” he shouted, spreading his arms and launching himself in a perfect swan dive into the sparkling water below.

Somewhere between “Look at me,” and the sparkling water below, something went dreadfully wrong with his perfect dive. He hit the water with a resounding “kersplash.” Breaking the surface of the water, he held his hand to his left ear.

“I think I broke something.” The local emergency room confirmed, indeed, a broken eardrum. The doctor advised bed rest and a quiet night…

As a recently married woman, I pushed a grocery cart through a tiny grocery store in the resort town and selected hamburger, tomato sauce and French bread. On my one-day anniversary, I stood in front of the tiny stove, my young husband sleeping off the effects of pain medications.  The water lapped onto the shore next to our honeymoon cottage as I sighed and heated  spaghetti sauce.

Tuesday dawned bright and clear, and we slept late, being lulled by the lapping waves on the nearby shore. All afternoon we streaked across the beautiful waves in a rented speedboat, churning up the water. We looked forward to a romantic dinner that night to celebrate our two–day anniversary. The sun shone deceivingly on my young husband’s bare legs and they changed from white, to pink, to bright red.

My young husband moved slowly toward our car, each painful step tugging at his sunburned legs. He tried to pull on his trousers but the effort was too painful. My young husband lay on the cool asbestos tile floor (who knew?) of our honeymoon cottage, moaning.

“I don’t think I can put my pants on. Sorry, Hon. No fancy dinner. Maybe tomorrow.”

A fairly jaded wife, I pushed a grocery cart through the tiny grocery store in the resort town and selected hamburger, tomato sauce and cookies. The storeowner smiled. After all, I had shopped there three days in a row and was his newest most-frequent shopper. I vowed to speak to mother about marriage. If this were going to continue, I would need to learn to cook something besides spaghetti.

Wednesday dawned bright and clear, we slept late…  We spent the afternoon driving around the lake. In the late afternoon, we stopped at a nice restaurant before any further calamity. We celebrated our three-day anniversary. It was as romantic as I had imagined. My husband’s head didn’t ache, his ear didn’t throb, his sunburn had faded to a dull pink, his pants were on, we didn’t eat spaghetti and I didn’t have to cook.

After dinner, at a drive-in theater, necking in the front seat somehow didn’t have its previous pre-marriage appeal. We determined it would be best to leave when the movie was only half over. It was getting very late, you see, nearly 9:30 after all, and we were anxious to return to our honeymoon cottage

By late afternoon, we thought about the events of the week so far. A migraine, a broken eardrum, a sunburn, and it became clear that we should cut our honeymoon short and return home before any further disaster occurred. I felt the need to speak to mother about marriage in general and recipes in particular.  By early evening, we bid the honeymoon cottage farewell and started for home.

We were both eager to reach home and resume…what honeymooners resume. The air was warm and balmy as we left the resort town. A crooked road down the mountain would take 30 minutes off our travel time. Driving the mountain road was difficult, with switchbacks and no roadside safety rails. Slowly maneuvering hairpin curves, eyes wide, we saw broken, twisted cars in the canyons below. Had they run off the road or were they shoved into the canyon to dispose of them?  At the bottom of the mountain, the valley stretched before us, and the terrible ordeal was finally over.

My young husband shifted gears and revved the engine. Nothing happened. He shifted to another gear and stepped on the gas. Nothing happened. The car coasted into a convenient gas station. He crawled under the car, and found….a broken axle. Sweat beaded on his forehead as he thought about what might have happened if the axle had broken at the top of the mountain on the winding road. We were safe, thank God, but how would we get home, 80 miles away?

As a mature, experienced wife of four days, able to handle any emergency, I dropped coins into the telephone. Daddy answered, and I said, “ Daddy, come get me….” whereupon, Daddy exploded,

“What’s wrong? Where are you? What has that beast done to my baby girl?” I explained that the beast had done nothing that I didn’t want done, but never the less, the axle on the MG was broken and we needed a tow.

Daddy drove for an hour and a half, rescued his baby girl and towed the car 80 miles unceremoniously at the end of a rope; a discouraged young bride and disgruntled half-frozen groom.

If we had seriously analyzed the disasters of the week, and felt them to be prophetic of our future life together, we might have applied for an annulment the next morning.  Perhaps we were too naïve, too inexperienced, or too much in love to realize the pitfalls that lay ahead.   58 years have passed and my husband’s hair is gray and my face is wrinkled. Through our marriage, we have encountered sickness and health, success and failure, joy and sorrow, but we continue to face life’s challenges together.

I placed the nightie back into the hope chest.  The pungent aroma of cedar clung in the air as I closed the lid.  I closed my eyes, thinking for a moment of those exciting, wonderful days and relived the thrills, frustrations and romance.

Returning to the kitchen, I put a pinch of salt into the spaghetti bubbling on the stove. Like a pinch of salt, it takes a touch of adversity to enhance the flavor to appreciate the fullness of life.  I smiled at the memory of a honeymoon cottage by the shores of a sky-blue lake, and a tiny stove, where another pot of spaghetti bubbled three nights in a row. Despite the unusual circumstance we shared that week, it was the most wonderful, exciting, perfect honeymoon a woman could ever experience, because I was with the man I love.