Just for  Sunday afternoon fun, I'm presenting a short story, obviously written by a CAT, telling his family history to readers willing to suspend disbelief... and smile. Let me know what you think. 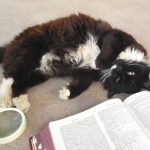 Until my father’s death, my family lived on a profitable little farm in Killarney, Ireland. Though I knew that an enchanted magic spell had changed me from a boy into a small cat at the time of his death, Mother would never discuss the details. Even as a cat, she loved me as a son. As time passed, Mother grew frail and I grew into a fine tabby-striped tom cat with four white feet and a fine reputation as a hunter.

One day she called me to her bedside. “Tabkins, I can no longer provide our bread and cheese. You must restore our good fortune or surely we will perish.” And so she began her tale of trickery and enchantment, deviltry, and a magic spell that had plagued our family since my father’s death.

Some years ago, our farm possessed six orange trees, three cows, and a potato patch, all sufficient to meet our needs. A wicked green leprechaun from a nearby mountain-top coveted, and tried often, to obtain our land by trickery, but father repeatedly rebuffed his guiles. In revenge, the evil creature fogged Father’s mind with a magic spell, causing him to fall into the river. To thwart my efforts to save Father’s life, he waved his magic wand again and changed me from a good-looking youth of comely bearing into a tabby-striped cat. Though the world profited by the addition of an exceedingly handsome cat, my father drowned. The leprechaun then cast a spell upon the three cows, causing them to give no milk. The orange trees ceased to bear fruit and the potato patch gave us only scant potatoes.

“You must seek out the leprechaun,” Mother said, “and retrieve the magic wand. Perhaps it will restore you to a human lad and our land into a profitable farm.” The tears in her eyes wrenched my heart, and yet I trembled in horror at the thought of facing the evil creature.

She lifted her frail hand. “Make your way to yonder mountain. High on the top beside a river, you’ll find the cave where the wicked leprechaun dwells,” she said. “Go, now, Tabkins. Our future is in your paws.”

I set out as she bid, knowing that facing a leprechaun, no matter how exceedingly good-looking I might be, my feline cunning would be sorely tested if I was to fool the evil leprechaun, steal the magic wand, and live to tell the tale.

With every step up the mountain, I cast about in my mind how to dupe the leprechaun into reversing his magic spell or stealing his wand. I came at last to the river.

“Halt. Who goes there?” The wicked leprechaun called from beneath the log that spanned the stream. “Answer, Cat, or I’ll turn you to stone.”

Panic seized my heart. An idea popped into my furry head. “I’m just a harmless pussy-cat out for a stroll. My, what a lovely river you have here, Sir Leprechaun.” A little honey-talk is always good to sooth a malevolent spirit. I sashayed across the log, humming, Katie From Killarney, and bowed low. “My name is Tabkins. Pray tell, what might your name be, kind sir?”

The leprechaun’s eyes narrowed. “My name is Merichandrick. What do you seek?”

“Perhaps a spot of tea? I’m weary from my travels.” I looked wistfully toward the cave, conveying abject vulnerability and friendliness.

“Come on in and I’ll light the fire,” said he, his green mouth atwitch, his brain surely swirling with some deviltry.

I followed him into the grotto, wary of any trick up his sleeve, sure that he had thoughts of tossing me into his stew pot. I scanned the cave, searching for the wand, keeping one wary eye on my host.

“Sit over there.” The imp pointed toward the fire.

“Oh, what a lovely bird,” I posited, sidling closer to a green and red parrot, its cage hanging from a golden hook, all the while seeking the hiding place of the magic wand. In a chair near the back of the cave, I spotted a pot of gold. Something long and thin poked from beneath a nearby red blanket. Aha! It must be the wand I seek.

“If I’m so invited,” says I with a yawn, patting my paw to my mouth, “Let us drink our tea and I’ll curl up for the night just yonder on your wee red blanket.”

He shook his mop of green curls. “Not there,” he shrieked, panic shining from his wicked eye. “Best you should sleep closer to the fire where it will warm your exceedingly handsome fur.”

“As you wish, and I thank you kindly for the hospitality,” says I. Oho! Once the little man sleeps, I’ll snatch the magic wand from beneath the blanket and skedaddle.

My host poured two mugs of tea and shoved one toward me. Expecting a trick, I sneezed, and as he reached for a handkerchief, I switched the mugs. Indeed, the mug was drugged. Soon after the evil goblin drank, he fell into a stupor.

Without further ado, I grabbed the magic wand, wrapped in a paper containing the magic spell, and hurried back to the farm.

Mother waved the wand, read the magic words, and the spell was broken. I was instantly changed back into a young man, even more comely than before. Soon, thereafter, the cows began to give milk, the orange trees blossomed and bore fruit, and this spring, we had a bumper crop of potatoes.

The leprechaun still lives in the cave with his parrot, but without his magic wand or his evil spells, his complexion has turned from green to a sallow yellow, and, embarrassed by his looks, he rarely leaves his cave.

As long as fortune smiles, we’ll leave him be, but if the cows go dry or the potato crop should ever fail, I happen to know where I can find an exceedingly ugly yellow leprechaun and a pot o’ gold.

Leave a comment for a chance to win a free copy of All Things Cat ...Twenty-one short stories all about cats or....

check out my book of short stories, All Things Cat, on Amazon in e-book for just $2.99.  http://tinyurl.com/y9p9htak 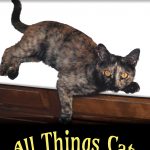