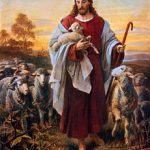 Bernhard Plockhorst (March 2, 1825 – May 18, 1907) was a German painter and graphic artist. In Germany, Plockhorst is mainly known only to experts today, whereas his pictures are still very popular in the United States and their reproductions can be found in many American homes and churches.

"The Good Shepherd" showing Christ caring for his flock, graces the stained glass windows of several U.S. American churches; the First Presbyterian Church in Tulsa, Oklahoma; and in the Zion Lutheran Church, in Baltimore, MD., as well as in thousands of copies in churches and homes. To this day, his painting of Christ’s face has become the most popular version of the accepted face of Christ.

In my next Mrs. Odboddy novel,  Agnes learns that her doctor’s Hippocratic Oath becomes hypocritical when she believes he has stolen an early lithograph of The Good Shepherd from her church. When she tracks the suspected doctor to a mansion in San Francisco, she very nearly loses her life. Mrs. Odboddy and the Devious Doctor is the fourth Mrs. Odboddy adventure and should be published next year,

In the first Mrs. Odboddy adventure, Mrs. Odboddy Hometown Patriot, Agnes attempts to locate the thief stealing ration books from mailboxes in her hometown during WWII. As she serves the community with all manner of volunteer activities, she believes there are sleeper Nazi agents in her small town and is determined to bring them to justice. When Mrs. Roosevelt comes to town, Agnes must become a hometown patriot to save her life. http://tinyurl.com/hdbvzsv 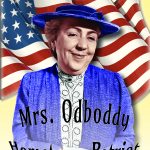 Agnes’s next adventure takes place on a train from California to Washington, D.C. as she carries a package to President Roosevelt. In Mrs. Odboddy Undercover Courier, Agnes is sure the package contains secret war documents, and is just as sure that Nazi spies will attempt to steal the package along the way. The characters she meets on the train are diverse and intriguing. A WWII wounded veteran helps her succeed in her journey as adverse events almost derail her along the way. http://tinyurl/com/jn5bzwb 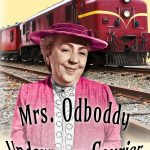 Mrs. Odboddy and Then There was a Tiger has Agnes back at home, falsely accused as a burglar and a thief. Her hysterical antics as she attempts to clear her name will keep you in stitches. And, yes, when she becomes involved with a county fair tiger, she learns more than she bargained about tigers as she attempts to save his striped hide and bring miscreants to justice.   https://tinyurl.com/y96qshuv

All novels are available for $3.99 at Amazon.