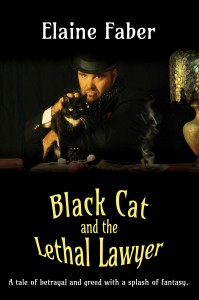 Black Cat and the Lethal Lawyer

A book review by Thumper, the cat with the memories.

Thumper’s the name. We just got to Grandmother’s Texas ranch and I met this babe…a cream tabby vixen with eyes the color of mustard and stripes the color of marigolds. Yowza! It was love at first sight.

After a brief courtship and an ‘understanding,’ Noe-Noe and I were hanging out by the river where we overheard Grandmother’s lawyer and the stable master talking. Seems the lawyer was upset that Grandma plans to change her beneficiary from the Children’s program he sponsors to either my person, Kimberlee, or her cousin, Dorian. Worse yet, he intends to kill Grandmother.

Well, let me tell you, it was enough to twitch the whiskers off a striped skunk! Noe-Noe and I vowed to keep the old gal safe, even though Grandmother’s reason for bringing the family to Texas isn’t the sweet family reunion she claimed. She has an ulterior motive to destroy Kimberlee’s family. In spite of Grandma’s wicked agenda, Noe-Noe and I agreed we had to protect the old biddy. She is family after all, and isn’t it every cat’s duty to protect his family?

What happened to our fun-filled family reunion? Grandma’s on a roll to disrupt Kimberlee’s life. The attorney plans to kill Grandma and now we’re suspecting the stable master is hiding a secret identity! It’s turned into a series of cat-astrophies that shouldn’t happen to a dog.

Speaking of a dog, cousin Dorian brought her dog to Texas, too. When Kimberlee took him for a walk out on the desert, she almost stepped on a rattlesnake. Yikes! Good thing I wasn’t with her. I’d rather face a killer any day of the week. A rattlesnake? …not so much.

If I was of a mind, I could clue you into what’s behind some of the mysteries around here. If you read my first book, Black Cat’s Legacy, you already know that with the aid of my ancestors’ memories, I helped Kimberlee solve some of the Fern Lake mysteries. Same thing here in Texas. There’s the stable master, for instance. Thanks to my great grandfather’s memory, I know that he was involved when Kimberlee’s father was murdered. And, what about Grandmother’s sinister plot with regard to Kimberlee’s little girl? Things are going from bad to worse and there’s only so much a cat can do.

I can’t wait to go home to Fern Lake. Here’s the problem. When we leave, Kimberlee says I have to say farewell to my soul-mate, Noe-Noe. (Big cat sigh). Kimberlee once said, ‘Why do we lose the things we love and things that bring us grief, hang around like warts on the end of your tail?’ That was paraphrased, of course, but you get the drift. Perhaps the fates will intervene and things will turn out okay. Black Cat and the Lethal Lawyer is a cozy mystery, after all!)

Elaine Faber’s short stories have appeared in multiple magazines and fourteen anthologies. She is a member of Sisters in Crime, Cat Writers Association, and Northern California Publisher and Authors. Elaine enjoys speaking on mystery panels and book signing events. Black Cat’s Legacy and Black Cat and the Lethal Lawyer are light romance and cozy cat mysteries. who with the aid of his ancestors’ memories, Thumper (Black Cat) helps Kimberlee solve the mysteries. The third book in the series is Black Cat and the Accidental Angel.

All novels are available at Amazon in print and digital. http://tinyurl.com/q3qrgyu