Why Washington DC Has 3000 Cherry Trees 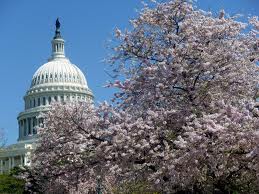 Where did they come from? Folks often schedule visits to Washington DC in the spring time to coincide with the blooming of their famous Cherry trees. Have you ever wondered just why Washington has so many cherry trees?

3000 Cherry Trees In January, 1910, Japan sent 2000 cherry trees to Washington as a good will gesture. Sadly, upon arrival, they were found to be diseased and infested with insects. To protect American growers, President William H. Taft ordered the trees burned. Letters from the Secretary of State to the Japanese Ambassador expressed deep regret to all concerned. Good will was maintained and in 1912, Japan again sent more than 3000 additional cherry trees from 12 different varieties to Washington D.C. Two thousand trees were planted on the White House grounds, and the remainder planted around the city and along the Potomac River from the Lincoln Memorial south toward Potomac Park. They grew and blossomed each spring to the delight of thousands of Washington visitors.

War is Declared Shortly after the Pearl Harbor attack in December, 1941, four cherry trees were cut down in retaliation by vandals. Letters poured into the National Parks Commission, calling for “cutting all the Japanese trees down and replacing them with an American variety.” Throughout the rest of the war, in hopes of preventing future damage and ill will, the trees were no long called 'Japanese' cherry trees, but referred to as those ‘oriental flowering cherry trees.’ The National Cherry Blossom festival, an annual springtime event since 1935 was suspended and did not return until 1947.

Cherry Blossom Festival At the Cherry Blossom festival, princesses and a queen are crowned. In 1957, a wealthy Japanese business woman donated a crown for the festival queen. It contains more than two pounds of gold and 1,585 pearls. The queen wears the famous piece for just a few moments when she is crowned. It is then replaced with a miniature crown of gold with a pearl topping each point. The queen wears this crown for the remainder of the evening and she keeps it as a momentum of the event.

Cuttings from the Trees In 1982 and on several occasions since, cuttings from the original 1912 cherry trees were returned to Japan to replace trees destroyed during the war and when the course of a river destroyed a number of them.

Where are We Now? Private funds were donated between 1986 and 1988 to replant another 676 trees to restore the trees to the original number. Between 1997 and 2011, cuttings from the surviving 1912 cherry trees were propagated to ensure preservation of the 1912 trees’ genetic lineage. These will be used in subsequent replacement plantings both in Washington and in Japan. Thus, the original 1912 gift will ensure a cycle of giving between Japan and the United States.