Black Cat and the Lethal Lawyer - An Excerpt 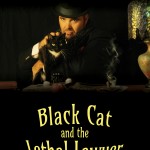 Re-read my 2015 novel again this week and was surprised what a wonderful story it was. Here is a short (edited) excerpt from Brett and Kimberlee's ride across the Texas prairie. Hope you purchase the book.

Heavy clouds formed overhead as Kimberlee’s mare plodded behind Juan with Brett as they rode single file through the underbrush into the valley. Kimberlee caught her breath as she reached the grassy meadow and the wild horses came into view. A streak of lightning crackled across the sky and distant thunder rumbled.

Quantum reared, and took off at a gallop, his black mane whipping as he led his mares away.

Brett gave his mount a kick and sprinted past Kimberlee and Juan. Kimberlee’s horse lunged after him. Kimberlee gripped the body of the horse with her knees. The wind beat at her face. Her heart thumped in time with the thundering hooves. Brett raced beside her, creating a cloud of dust and wind and noise. Adrenaline mingled with terror as she reveled in the exhilaration.

Her body throbbed with each stride of the beast’s surging muscles, driving through her legs. The breath in her throat burned as her mare rode neck to neck with Brett. His horse’s mane whipped against her hands, stinging like fire. Never had she felt so close to death and yet… so alive.

She turned and stared into the horse’s giant brown eye, the dark and the light of it looking like land and water on a distant planet floating through the universe. Her heart soared as she became one with the wind and the grass and the dirt and the noise, overcome with abounding joy. She swallowed a sob, as the ecstasy of the moment washed over her and she wished it would never end. Quantum’s herd pulled away and seemed to disappear in a cloud of dust. Kimberlee’s mare skidded to a halt beside Brett.

Juan pounded up behind them and pulled his horse to a halt. “What’s the big idea?” His face was as dark as the clouds overhead. “You both could have been killed!” Lightning streaked and thunder rumbled.

“Wow! That was great. I’ve never had such a thrill.” Brett beat his hat against his leather chaps. Still panting from the exertion, Kimberlee could only nod. Her body tingled, unable to express what she felt.

“We need to get moving. These summer storms can be vicious. We don’t want to be caught out here on the prairie.” Juan turned his horse back toward the ranch. As great drops of rain pelted down, Kimberlee sniffed and tasted the scent of it. Little puffs of dust bounced in the dry earth. The smell of damp earth would forever remind her of this wonderful afternoon.

An unexplained lump rose up in her throat. The exhilaration of following Quantum’s herd filled her heart to overflowing. She couldn’t gulp down her sobs. Rain mingled with tears streaming down her face.

Brett slid off his horse and handed the reins to Juan. “What is it, honey?” He pulled her from the saddle and wrapped her in his arms.

“It was all so wonderful. The wind, the lightning... I… I’ve never felt anything like that before. I needed to be a part of it, to become one with all this. I needed to remember that God is in control and we are powerless to change what happens around us. I don’t know how to explain it.” Tears trickled down her face.

Brett dabbed her cheeks with his handkerchief. “I understand. I−”

Kimberlee pulled her head back. “No. You don’t. I don’t understand it myself. We were riding and the thunder and lightning… It was like, all at once I understood.”

“Tell me, honey. Understood what?”

Kimberlee looked out across the meadow where the rain poured onto the dry earth, and then back at Brett. “Now I understand. It’s not important, none of it. What’s important is you and me, our family.” She waved her hand. “The land… and this. Quantum and his herd. They’re important and the lightning and the thunder. She smiled. “I’m ready now. Let’s go home.”

A streak of lightning slashed across the sky and distant thunder crashed as the storm moved further across the plains. As suddenly as it started, the rain stopped and the sun came out.

The bushes sparkled with clustered rain droplets, catching the sun and glistening like diamonds. The hills jutted up from the prairie floor like mounds of cookie dough. A brilliant rainbow of red, yellow, green and blue circled the top of the canyon. And, there again was the contrariness of the prairie, intense and challenging one minute, and God’s beautiful garden the next.

I can send you an autographed paperback for $15.00 (free shipping).  Email: Elaine.Faber @mindcandymysteries.com or Amazon e-book is just $3.99