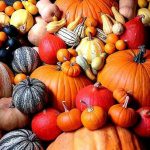 “If I’ve told you once,” Papa Red Warty Thing said. “I’ve told you a dozen times not to stray so far. Look at you. You’re already at the end of your tendrils and into the road. When the tractor comes, you’ll be smashed flatter than a fritter!”

Turning toward his parents, Papa Red Warty Thing and Sweet Sugar Pie, unruly Harvest Jack huffed, “I’d rather be a fritter than bored to death, lying face up in the sun like my cousins, Baby Boo, Wee-be-Little, and Jack-be-Little. They never stray past the first twist in their vines.”

Harvest Jack’s pumpkin cousins gasped. Such disrespect! Such defiance! And with Halloween and Thanksgiving right around the corner. Unheard of in polite Cucurbita Pepo society! They turned away from the disobedient cultivar and buried their tendrils and stems beneath their prickly leaves.

“That child shall be the death of me yet,” Sweet Sugar Pie declared. “How does he ever expect to become a pumpkin pie acting like that? It’s your fault. Your ancestors never looked like the rest of us. They were always rebellious.”

Papa Red Warty Thing shivered. “If the lad doesn’t change his attitude, he’s likely to end up gutted, with an ugly smirk carved on his face.”

Papa Red Warty Thing was wrong, for by now, Harvest Jack had wandered into the road and lay directly in the path of the giant tractor grinding its way down the road, swooping up all in its path, and dumping the unfortunate ones into a hopper to be carried off to an uncertain future. Sweet Sugar Pie shrieked, “It’s coming! Beware!”

Harvest Jack heard the engine and turned toward the sound. “Uh Oh!” The seeds in his belly shook in terror. Papa Red Warty Thing was right. He was about to be crunched into a fritter.

A raven swooped down and landed on his stem. “It serves you right for wandering into the road. Papa Red Warty Thing warned you.”

How he wished to be alongside little, white, cousin Baby-Boo, or little cousin Wee-be-Little’s tiny, orange body. Their future was assured. They would become cute little decorations, perched alongside a costumed vampire doll in the middle of a mantle, or maybe in a wheelbarrow surrounded by harvest leaves and acorns and a couple Rock Star or Howden’s. Even his distant cousin Lil’ Pumpkemon with his white body and orange stripes might end up on the front porch with his larger cousins.

Directly in the path of the tractor, Harvest Jack’s future was destined to be ground into pulp.

Suddenly, he heard guttural, humanoid sounds reverberating through his stem. Harvest Jack felt himself lifted and then felt the cool earth beneath his bottom. What happened? He was lying just inches from Papa Red Warty Thing and Sweet Sugar Pie. Somehow, he’d escaped the wheels of the tractor and was back in his own row of cultivar cousins. “Oh, Papa Red Warty Thing! You were right,” Harvest Jack cried. “I’ll never disobey again. I promise I’ll grow up and become a Harvest dinner pie, but… do I get to choose which kind of pie I want to be?”

“My dear, you can’t be a cherry pie, because you’re a pumpkin.” Papa Red Warty Thing patiently explained.

Sweet Sugar Pie screamed. “According to today’s media, if the lad wants to be a cherry pie, then he’s a cherry pie! It’s your fault, Papa Red Warty Thing. You were always too lenient with the lad!”

Victory With a Victory Garden

In my latest humorous mystery/adventure, Mrs. Odboddy Home Town Patriot, Agnes grows and tends vegetables and fruit in her back yard victory garden. Here are some facts about victory gardens you may not know.

During the course of WWII, and due to labor and transportation shortages, trains and trucks were used to move soldiers and equipment, thus limiting the ability to transport fruit and vegetables products to cities and towns across the United States. Therefore, the U.S. Department of Agriculture encouraged planting victory gardens in every back yard, vacant lot or unused plot of land.

One U.S. propaganda poster read, Our Food is Fighting. Such war time posters sent the message to local citizens that produce from their own gardens would help lower the price of vegetables needed by the U.S War Department to feed the troops. Such a savings could then be used elsewhere to provide weapons and clothing to the military: Home victory gardens also increased the supply of produce that was otherwise rationed and limited to homemakers across the county. Around one third of the vegetables produced by the United States during the war years came from victory gardens.

By May 1943, there were 20 million victory gardens everywhere from rooftops and empty lots to backyards and schoolyards or in any other usable plot of dirt in the United States. It became a sign of patriotism to convert your front lawn into a vegetable garden.

Eleanor Roosevelt planted a victory garden on the White House grounds as an example to the vast number of dedicated followers of her newspaper articles and radio broadcasts. This was viewed with concern by the Department of Agriculture. Not everyone was an experienced gardener, so the government issued educational pamphlets, as did seed and agricultural companies, including growing techniques and recipes. As a result, 9,000,000–10,000,000 tons of fruits and vegetables were successfully harvested in homes and community plots in 1944. “Grow your own, can your own", was a slogan that referred to families growing and canning their own victory garden food, so the harvest could last all year.

Even in New York City, lawns were converted to victory gardens, as were portions of San Francisco Golden Gate Park. Schools and community centers still plant gardens to teach children about harvesting, good nutrition and the wonder of watching nature’s bounty when properly cared for.

To read about Agnes Odboddy’s victory garden and her recipe for Oxtail Stew and War Time cake, Mrs. Odboddy Home Town Patriot is available at Amazon for just $3.99, or about the same price as a nice package of bran muffins from today’s supermarket. Bran muffins or hours of reading enjoyment. You make the call.